Data science and public transport are the perfect combination for Sanneke Mulderink-Scholten. A businesswoman and process optimisation expert, she loves nothing better than improving operations and customer experience for organisations , driving efficiency and positive change across the board. Here she talks about opening up mobile tickets, better data insight and changing mindsets.

How did you come to work in MaaS? 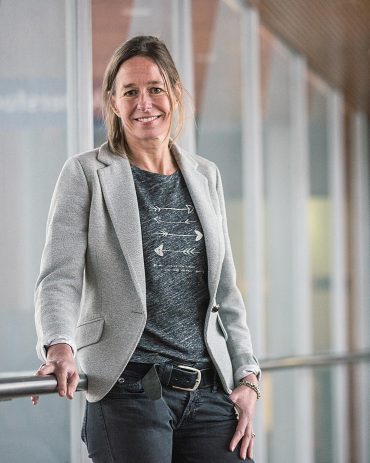 About 13 years ago, I started LYNXX together with Paul Rooijmans. He was involved in the public transport sector and my background was in data science so we combined the two specialisms. It’s a data science company based in Amersfoort, Holland and Sydney, Australia.

We’ve always been involved in the public transport sector. I like the fact it’s something really tangible; it’s something you use every day and it has an impact on society. We also travel around the globe a great deal and we thought it’s crazy that you can plan with Google but you can’t buy a ticket on your phone.

We were working very closely with Connexxion – Transdev about four years ago when we discussed the opportunity to make mobile tickets available to travellers so they could get from A to B, independent of what transport operator they were using. Connexxion gave us the okay to offer the Schiphol Airport to Amsterdam route, and that’s how we started.

How did it progress from there?

As soon as we started offering tickets on that one line, they said why not offer all our tickets? They realised it was just a new distribution channel so it was good for everybody. It grew from there. We also started offering all Dutch railway tickets, and then tickets for all the different transport operators in Holland. They slowly wanted to connect, starting with their full fare tickets. It was a major step for them because they didn’t know us as a distribution channel and were a bit reluctant.

It took a change in mindset on the providers’ part. It makes sense to operate via other third parties to increase revenue and make travelling by public transport easier for end users. For the past few years, we’ve been knocking on the doors of all operators, explaining why it’s of huge value to society, for travellers and also, of course, for the climate as more people are concerned about the impact of their travel choices on the environment. Nowadays, Tranzer is a platform that offers tickets for many European transport operators, including taxis and bikes, as well as other large customer facing platforms like KLM, WeChat, Q8, Multi Tankcard, and KLM, to name but a few.

How did you change the mindset of the transport sector?

It depends on the country. For example, Italy and Belgium are ready for it. They have their APIs, they’re sharing tickets and prices with different third parties. In Holland, it’s a divided market. We have concessions for certain periods with strict regulation. What we encountered most is that operators are afraid they will lose their customers by using third-party platforms like Tranzer. Nowadays, there’s confidence that we’re not there to steal their customers; we’re there to make more revenue for them. And most of all, we’re there to help people make a conscious choice about how they travel from A to B and to keep our cities flowing. That’s our mission.

What gaps or trends did you see in the marketplace?

Coming from a data science background, I immediately saw that there was a huge gold mine we could explore. I knew the public transport sector didn’t do very much with their data. It was really new for them. I thought it would be very interesting to see how we could push the sector forward and make them conscious of their data’s value. That was the first step. Then we saw that we could add value to a company just by showing them what gold they already had within their organisations.

With Tranzer we could see an upcoming market. People want to have an easy life, to have better support in their travel options so they don’t have to do all of the research themselves. Where do I buy a ticket? What is the price? It was just so difficult; that was the next step. We also challenged the status quo because public transport is pretty slow and old-fashioned.

We believed in a better future – and that belief is something that drives us forward. It also helped in all the discussions with operators who were reluctant to share their tickets. We had such a belief that they had to move forward otherwise they would miss the boat and other parties would emerge and take over. Look at FlixBus, which is becoming a competitor to the train, or the micromobility services that are spread out in our cities. Regulation is needed to create a fair market place. Our view is that all mobility assets should open up their services and tickets to make better use of public space. This will create sustainable businesses and keep our cities livable.

Are countries and providers opening up their data more readily now?

Fortunately, there are some countries that are working on new regulation like Finland and France. Holland is starting; I’m cooperating with the Dutch Government and parliament but it will take time to get all transport operators – including public transport – to open up their APIs to third parties. However, if we can achieve this it will help to ensure that occupancy rates are as high as possible. That’s our vision.

Public transport operators are definitely changing their mindset; they see the market being redefined. It also helps that the Government has invested €20 million in MaaS pilots in seven regions where they have problems with public transport. From that perspective, operators are forced to cooperate with the different pilots which is also helping to open up data.

What other key challenges do you see in terms of opening up ticket systems?

There are some very complex ticketing systems in a lot of countries. They’re not ready to share because, for example, the metro system in Paris still uses magnetic strips; you can’t replace cards by a barcode on your phone. There are an awful lot of hurdles in the gate systems.

EMV credit card payment, Apple Pay, Google Pay, will be part of the future. A lot of countries are preparing for that but it will take time. Metro systems have been there for many years; they’re pretty old-fashioned, but work fantastically well. They’re fast and can move a lot of travellers around in split seconds. EMV is expensive so besides this payment method in high density systems we’ll also see proprietary account-based systems with tokens.

In what ways can operators gain better insight from their data?

Data could be a week, a month or a year old. That’s how organisations currently plan. However, now there’s more real-time access to data which makes it easier to understand what the demand will be for the next couple of hours, for example. Predictive analytics will play a very big role too such as predicting traffic jams.

Public transport operators already use predictive analytics right now for crowding but it’s based on previous years of data and insight. However, pricing can be dynamic. This means it’s possible to adjust prices when there’s high demand and transport is crowded. When it’s raining or snowing people behave in a different manner. That’s what Uber does. When it’s raining, it’s more expensive to take a cab, balancing demand and pricing.

People are very willing to pay for comfortable travel so we think that operators have a lot to gain from this fact. However, the balance between price and demand is complex so we need to design systems that can cope with this. Putting in more infrastructure and rolling stock isn’t a viable long-term option because it will become too difficult and expensive. We need to start changing our behaviour and understanding that we can travel at any time – but there will be a cost associated to it, depending on the choices we make.

We also need to keep the public transport system accessible for people on a low budget, as is currently the case in many cities. In this way, you can influence the behaviour of travellers because, for example, they may choose a later bus which is cheaper based on the demand.

What do you think MaaS will look like in the future?

In the future people won’t own a car any more. Instead, they will see their location on a map and the kind of cars available, such as SnapCar. They’ll be able to compare the different prices and book on their phone. Comparison is very important so you have the fullest range of options to choose from – similar to the airline comparison websites. I want to go from Amsterdam to Barcelona, I can go with Ryanair or maybe I have a stopover, it’s less expensive. You can make your choice based on the most comfortable, cheapest, fastest option or the one with the least environmental impact.

Travel will also be a much more visual experience. You will pay for your bus and then you will be able to see the vehicle coming and the location of the platform. With Uber, I love how you can see your taxi; it gives you that added confidence it’s going to turn up. Of course, the more supply there is, the more of a challenge it is to visualise it and also to integrate the payment so travellers pay one single price for the whole of their journey rather than each individual leg of the trip. If your preference is for fastest, for example, then you see just the top three fastest modes. As an end user, you don’t want to search through a whole long list of other options. You just want the machine to think for you; it’s the fastest but it’s also a reasonable price.

Who do you admire most within the world of mobility?

Richard Branson. He reshaped the world of flying by taking away the biggest frustrations at that time: price and comfort. He started offering cheap flights which completely changed the airline industry. He was brave enough to just do it and therefore had such an impact on the market. Tranzer wants to take away the hassle of buying a ticket for public transport by offering different options and paying just by using your mobile phone.

As the co-founder of Tranzer and LYNXX, Sanneke combines her passion for the transport sector, process improvement and data analytics. A Lean Six Sigma Black Belt expert, she brings an incredible amount of expertise to improving operational processes, driving cost efficiency and effectiveness within the mobility space and the projects she works on.

Having worked within mobility for many years, Sanneke loves the tangible difference that positive disruption can bring to the transport sector, helping to improve lives and individual travel experiences for citizens as well as encouraging better access to public transport.

You can connect with Sanneke on LinkedIn.

Download our research and learn how you can integrate ground transportation to your service.
* We will use your email address to keep you informed of developments on this topic

Decide which cookies you want to allow. You can change these settings at any time. However, this can result in some functions no longer being available. For information on deleting the cookies, please consult your browser’s help function. Learn more about the cookies we use.

With the slider, you can enable or disable different types of cookies: